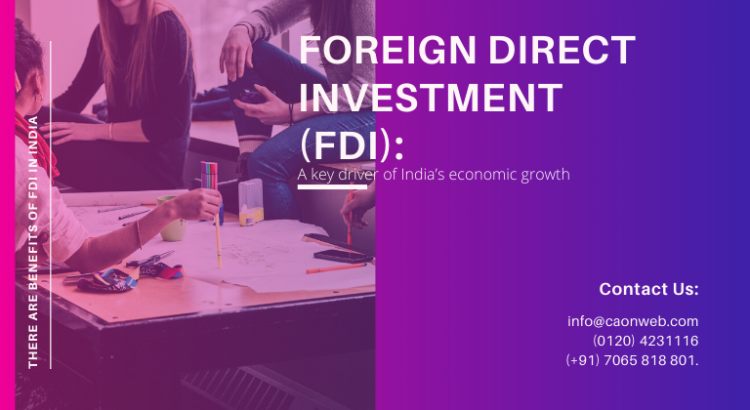 FDI is an investment from a party in one country into the business/corporations of another country with the intention of having a “lasting interest”. Here the “lasting interest” is determined when the investing party acquires a share of at least 10% voting right in other organisation. Therefore, the element of control is the key differentiator between FDI & Foreign portfolio investment (FPI).

FDI in India is not just restricted to the movement of capital across borders but it also includes movement of other elements such as skills, technology, process, management

Since the liberalisation of the Indian economy in 1991, the climate of Investment has improved exponentially. This is more or else because of ease in FDI reforms across sectors.

To attract a huge chunk of investors from outside, Government of India (GOI) has made policy of FDI in India in such a way that it is more transparent & easy to understand for any investors.

There are two ways of FDI in India.

For a mixed economy like that of India where we have both public and private sectors, it’s need of the hour that we should bring in as much FDI in India as possible since it will open new doors for the Indian economy and help in achieving the dream of becoming $5b economy by 2024.

FDI is the major driver for economic growth of India. Some of the factors which helps in attracting FDI in India are: Abundance of natural resource, market size, infrastructure, geographical location, government policies

Alternatively, FDI can be brownfield – wherein an organisation expands by way of cross-border mergers, acquisitions and joint ventures – by either leasing or purchasing existing facilities for its production. The clear advantage of brownfield investments is the savings in cost and time for starting up, as well as engaging in construction activities.

Read other blog: APPROVAL PROCESS FOR FDI IN INDIA

BENEFITS OF FDI IN INDIA

Creation of jobs is the most obvious advantage of FDI in India. It is also one of the most important reasons why a nation, especially a developing one, looks to attract FDI. Increased FDI boosts the manufacturing as well as the services sector. This in turn creates jobs, and helps reduce unemployment among the educated youth – as well as skilled and unskilled labour – in the country.

This is one of the less obvious advantages of FDI. Hence, it is often understated. Human Capital refers to the knowledge and competence of the workforce. Skills gained and enhanced through training and experience boost the education and human capital quotient of the country. Once developed, human capital is mobile.

This is one of the most crucial benefits of FDI for a developing country. With the dawn of FDI in India, backward areas were transformed into industrial regions. This in turn provides a boost to the social economy of the area.

Most updates technology, international operations practices are also brought in by bringing in FDI. Over time, the introduction of newer, enhanced technologies and processes results in their diffusion into the local economy, resulting in enhanced efficiency and effectiveness of the industry.

Since all the goods produced from FDI are not meant for domestic consumption rather many of these products are produced to be traded in global markets. The creation of 100% Export oriented Units (EOU) and Economic Zones have further assisted FDI investors in boosting their exports from other countries.

The constant flow of FDI into a country translates into a continuous flow of foreign exchange. RBI being central bank has certain responsibilities which it requires to fulfil; one of them is maintaining a substantial amount of foreign exchange reserves which acts as a buffer in case of any slump.

FDI is a source of external capital and higher revenues for a country. When factories are constructed, at least some local labour, materials and equipment are utilised. The people who are employed by such factories thus have more money to spend. This creates more jobs.
These factories will also create additional tax revenue for the Government that can be infused into creating and improving physical and financial infrastructure.

Capital inflow is beneficial for countries with limited domestic resources, as well as countries limited by opportunities to raise funds in global capital markets.